Rivers like the Kai !Gariep are “… one of the major geographical features of this country. It traverses the whole of South Africa and its tributaries have their catchment areas in all parts of the country. It is also a dynamic metaphor, which gets us away from the sense of unchanging, eternal, and God-given identities... It accommodates the fact that at certain times of our history, any one tributary might flow more strongly than the others, that new streamlets and springs come into being and add their drops to this or that tributary, even as others dry up and disappear; above all, it represents the decisive notion that the mainstream is constituted by the confluence of all the tributaries, i.e. that no single current dominates, that all the tributaries in their ever-changing forms continue to exist as such, even as they continue to constitute and reconstitute the mainstream.”

The Camissa River  in Cape Town, and Camissa Rivers across Southern Africa takes its generic indigenous name meaning “sweet drinking water for all” from the old !Kora language – these include the Zambezi, Shashe-Limpopo, Umgeni, Vaal, Kai !Gariep, Kei, Keiskamma, Cumissa (Fish) down to the Camissa River which still flows in channels under the City of Cape Town.

Twenty-five years ago the Camissa Seven Tributaries Matrix was developed as a teaching tool, by Heritage Whisperer Patric Tariq Mellet, to champion an understanding of the multi-ethnic, multi-cultural and rich ancestral roots of Africans who had been labelled ‘Coloured’ and indoctrinated with race theories and the false notion of an ‘empty-land’ only occupied by two ethnic groups - Khoe and San, who were invaded by alien black people.

The Camissa Seven Tributary Matrix was inspired by the iconic Seven Steps of District Six and by the Camissa River with its over 40 sub-streams and springs across Cape Town. The Camissa once flowed openly through Cape Town but is now forced underground covered over by the super-structure of the city. As such it provides a metaphor – which in turn is inspired by the words of the late Dr Neville Alexander with whom Patric Tariq Mellet collaborated in inspiring the youthful cultural multi-media production Afrikaaps. 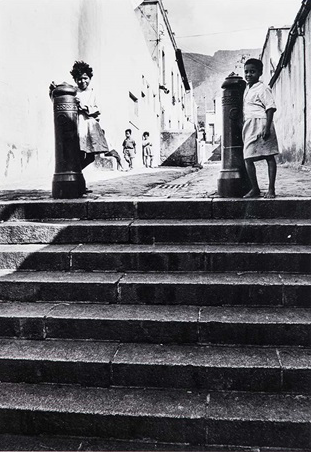 Another tangible metaphor that inspired the matrix
for exploring the seven tributaries of Camissa African
identity was the iconic Seven Steps of District Six
“Os is die mense vannie trappe mos”.

The Camissa Seven Tributaries Matrix moves away from Race-Colour-Ethnicity-Language as identity-features, established by the traditional racist colonial inspired anthropological constructs, and also recognises that homogeneity cannot be applied to any South African social formations, all of which do not have 'RCEL' uniformity. Homogeneity certainly cannot be applied to the 400 year-old social phenomenon labelled ‘Coloured’ and found not only in the Cape but across South Africa and Southern Africa. Indeed, similar social communities can be found in every port city on Africa’s coastline.

The Camissa Seven Tributary Matrix uses the fluidity of the analogy with rivers and life-supporting drinking water, and it recognises places as rallying points in the peopling of South Africa. It further recognises experiences and struggles in the shaping of communities across Southern Africa and that this shaping changes over time and is not static. Attempts to box-in identity and to politicise it ever since the fathers of modern race-classification in South Africa from Adam Tas through to Wilhelm Bleek and Leonhard Schultz started this trajectory has always thrown up contradictions and will continue to do so.

The Camissa Seven Tributary Matrix focuses on ancestral-cultural heritage with its many facets as a means whereby people are able to celebrate and be inspired by their roots in a non-chauvinistic manner which rejects race classification and race theory, and does not elevate ethnicity nor colour shades and features to ethno-national status. The matrix highlights the commonality of experiences and struggles shared, and the ability to rise above adversity as being the glue that binds social formations.

For Camissa Africans there has been distinctive parameters over time that define the emergence of a social phenomenon just as much as most other African communities in South Africa also emerged in the modern period rooted in older social formations and multi-ethnicities. There cannot be a contradiction whereby some of these are recognised as having been born over the past 600 years and others not. Colonialism itself was a catalyst for seismic changes in social identity.  For Camissa Africans  the commonality of experience of specific adversities and crimes against humanity, as well as the common experiences of struggling in this environment for dignity and rising above these adversities – colonialism, slavery, war and genocide, de-Africanisation, and Apartheid. Like every other African community there are parameters that define Camissa African society and there are many sub-cultures within the Camissa African fold.

In South Africa there are three broad ancestral-cultural streams that flow into the wonderful diverse whole who call ourselves South African or Mzansi people (People of the South); namely Africans with our many diverse streams, Afro-Europeans also with many diverse streams, and Afro-Asians with many diverse streams. These streams have no hard edges as our waters come together in a modern nation-state. We are not ‘races’ and ‘colours’ or engineered linguistic-race nations as Apartheid ideology propagated and enforced. Our greatest challenge in the 21st century is not to pour new wine into the old wineskins of colonial racism and Apartheid.

One cannot wish away nor suppress the celebration of ancestral and cultural heritage, and one should not do so. This would be a violation in terms of ‘Crimes Against Humanity’ just as much as Apartheid and Nazism was such. Segregation and assimilation are twin evils both of which involve social engineering. But ancestral-cultural diversity and celebration thereof should never assume to have primacy characteristics, superiority characteristics, supremacist characteristics that are expressed through claims of being ‘First’ and ‘Exclusive’ in a ladder of worth and intellectual-cultural superiority.

The Camissa Seven Tributaries Matrix identify the following streams that come together in the Camissa Embrace:

In all, over 195 roots of origin, predominantly African (68%) with Asian admixture (32%) which includes some Eurasian and European roots too. 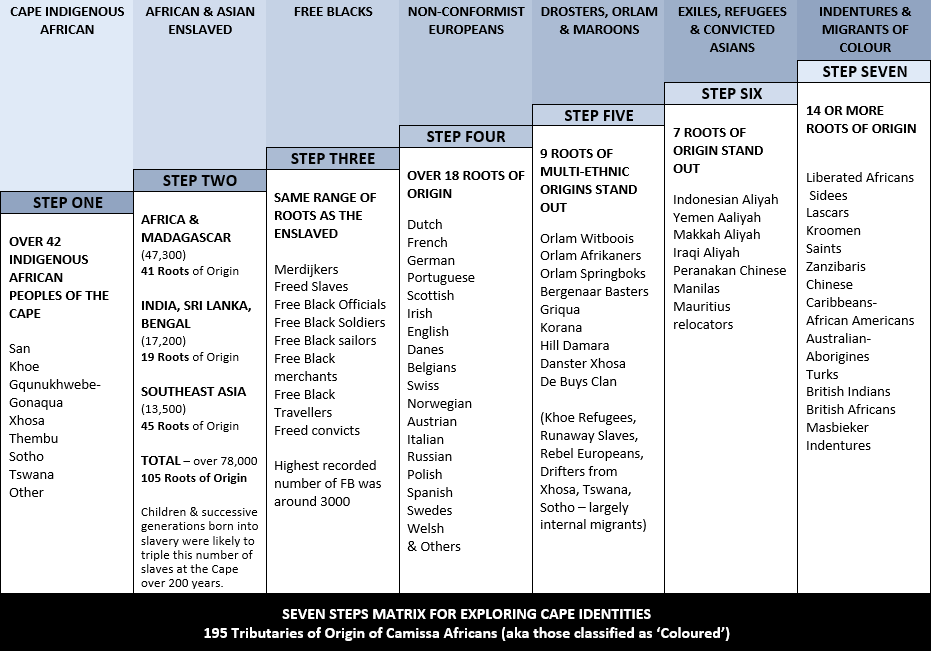