Previously research asserted that no more than 42 European ships came to Table Bay before 1652, that this was sporadic and limited to two short periods of months in a year and that there was little contact between the indigenous people of the Cape and European visitors. In the same vein only a few European diarists voices are ever quoted to convey record of engagements with the Khoe Africans. Overall the impression is given that Khoe-European relations and serious engagement with shipping only occurred after the arrival of Jan van Riebeeck in 1652. But more in-depth investigation of maritime history since the last decade of the 20st century has challenged what can be called The Lie of 1652. 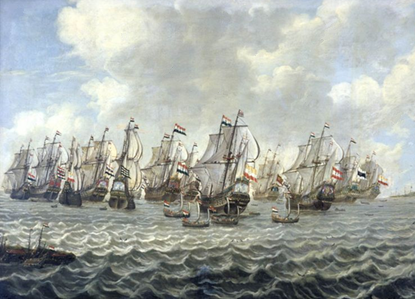 One maritime historian, Robin Knox-Johnson, dealing with the Cape, already back in 1989 brought to light that for the period 1600 to 1700 there were 1730 Dutch vessels alone that went back and forth between Europe and Southeast Asia, and that as many voyages had occurred before 1652 as after that date until 1700 (Pg 56 ‘The Cape of Good Hope – Maritime History’). Consultations of the Huygens Database of 8561 VOC (Verenigde Oost-Indische Compagnie) ships and the sub-set of those with logbooks up to 1795 further provides us with solid and useful factual information to rebuff the poor quality of previous maritime history research on European visitation to Table Bay. Broader research also shows us that for the period 1600 to 1652 there were 286 English ships and 146 Portuguese, French and Danish ships that stopped off at the Cape of Good Hope too. This information was expanded on by Leiden University researchers Gaastra and Bruijn to give us the hardcore facts about the average days of stop-overs (24 days), the numbers of travellers on board the ships for each decade and much more.

Huygens Database verifies the following – of a total of 1072 voyages outward and homeward bound there are 334 VOC ships, verified by means of ship logs, that can be definitely said to have stopped over at the Cape of Good Hope, with 54 110 people for an average of three weeks per stop-over; with logbook entries for the duration of stay at the Cape. Huygens Database also holds out the possibility with further research and acquisition of logbooks that a further 738 VOC ships could have stopped off at Table Bay. So far Huygens Database can only verify that 34 VOC ships definitely did not stop-over at Table Bay. Discussion in the work of Gaastra and Bruijn supports a hypothesis that most of the other 738 VOC ships would have stopped at Table Bay too. 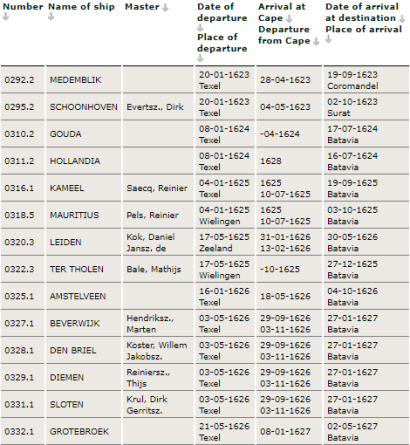 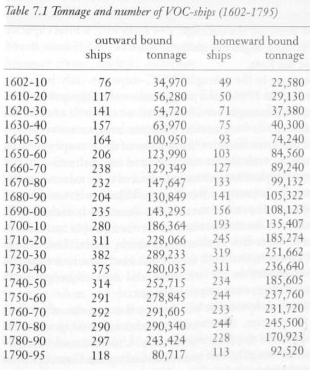 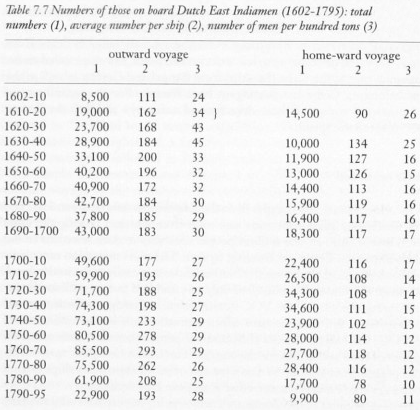 Of the English ships we know that from 1616 it became compulsory for these to stop-over at the Cape and that if we disaggregate half of the 55 ships before 1616 we still have another 248 ships doing stop-over’s at the Cape. Even if we conservatively only accept that half of the 146 other European ships stopped at the Cape and adda further 73, we have a total of 301 non-Dutch ships doing stop-overs at the Cape with an additional more than 50 000 travelers on board. So, at a minimum 635 ships carrying around 105 000 travelers can be verified as doing stop-overs at the Cape, with a hypothesized likelihood of double this number being likely to have visited the Cape. Ie: Over 200 000 visitors on over 1200 ships visited the Cape before 1652, rather than 42 ships as previously suggested by researchers as late as Elphick in his book ‘Khoikhoi and the Founding of White South Africa’, published in 1985.

We also know that in the cases of two shipwrecks in 1644 and 1647 respectively, large numbers of 344 persons in the case of the Mauritius Eylant (4 months stayover) and 90 for the Nieuwe Haerlem (9 months stayover) are recorded as residing at the Cape of Good Hope and having constructed forts. Another Danish shipwrecked Maroons did the same. 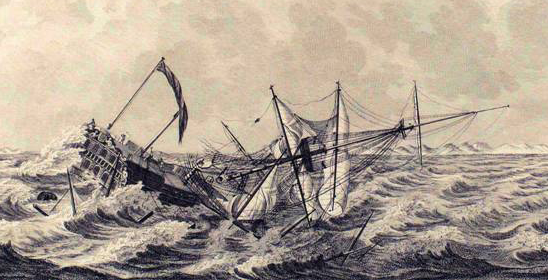 The circumstances around these shipwrecks also give an indication of how busy the pro-port of Table Bay was at the time.

In each case more ships - Witte Olifant & Schiedam with the Nieuwe Haerlem; and English ships Endeavor & another un-named, plus Vrede & Tijer in the case of the Mauritius Eylandt - were involved as per records of the rescue events. This is a rather crowded scenario for there being claims of only occasional European shipping coming to Table Bay. Gaastra and Bruijn in their research make the point that although there were two busy periods in each year for stop-overs of European vessels, these occurred all year round.

In 1648 when the Dutch homeward bound fleet stopped in Table Bay to pick up those marooned as a result of the Haerlem wreck, there were 12 ships in that fleet and they remained for 3 weeks (as in the romantic painting shown here). Jan van Riebeeck was on his voyage of disgrace on a ship in that fleet which picked up Captain Janzsens. Jan van Riebeeck had been recalled from his post in Vietnam for illegal trading at night for his own pocket and faced trial in Batavia. Having been found guilty he was relieved of his rank, fined, and sent back to the Netherlands in disgrace. He later was refused any posts in India or Southeast Asia but he was allowed to redeem himself at the demoted rank of Commander at the Cape of Good Hope. On his recall in 1662 he was not promoted as he had not achieved his mission to establish a self-sustaining port refreshment station, and the VOC had an unprofitable scenario at the Cape which was costing them money rather than making money. He spent three years in Malacca in a post that was demoted from Governor to Commander. After his wife’s death he asked to be relieved of his post and got a much lower post as a clerk in Batavia. The life and misfortunes of Jan van Riebeeck is not well known in South Africa. 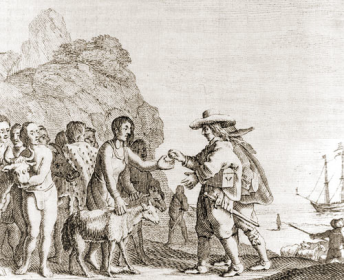 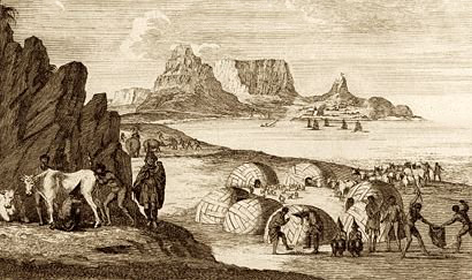 The over-amplified and somewhat romanticised first 30 years at the Cape starting with the arrival of Jan van Riebeeck has downplayed the important pre-colonial 52 years of European and Khoe engagement. We are told that at least 5 Khoe indigenous people travelled abroad over those years, probably more. Only two sketchy narratives are available about Xhore and Autshumao, but enough to dispel much European mythology and primitivizing of the Khoe. We know that Autshumao had adopted dressing habits and culinary habits acquired in his voyage to Java and back. That he was able to converse in at least three European languages and the English referred to him as the Governor at the Cape and their business agent, emphasise the fact that by simply characterizing him as an ignorant vagabond and hustler, is a gross misrepresentation. Yet van Riebeeck referred to him and his people at times as ignorant beach-bums (Strandlopers) and dirty beasts. 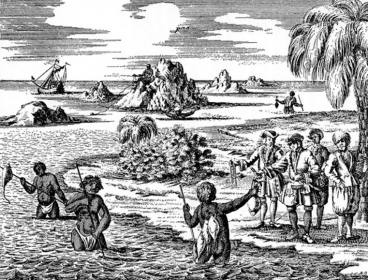 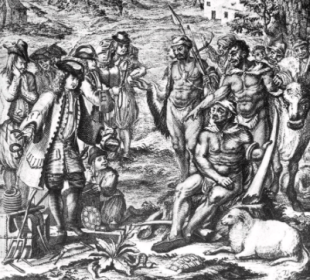 It is impossible for there have had to have been no impacts on Cape Khoe people or on Europeans in a half-century of mass contact that can be shown to have taken place. The emergence of a multi-ethnic community at Camissa would first have began to emerge at this time. Descriptions of some in the ǁAmmaqua traders over these years attest to this reality which is associated with all ports throughout the world. Notably the ships crews and the travelers included Africans, Arabs, Indians, and Southeast Asians, and not just Europeans. While many artists depict the Khoe in paintings and caricatures as primitive, idle, cultureless and objectified passive objects of the European gaze, there are other artists, as show here, who project the Khoe as an industrious and proud people. 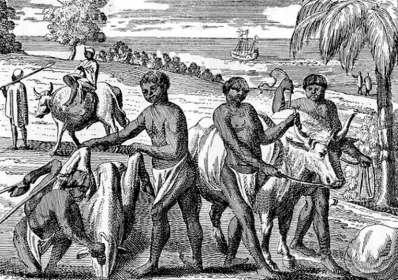 This entire arena is just begging for young energetic black researchers to take up this challenging mission. We need black perspectives on this history. We need researchers to go over to the Netherlands and England to go and read ships logs and other primary sources to see what can be gleaned from what happened at the Cape and on the high seas during this period. There is enough information that totally disrupts the white colonial version of the early history of the Cape to justify fresh eyes without colonial filtering spectacles to go and interrogate our past. Most especially they need to look for the black voice or black experience that may have made its way into ships logs, and the observations of scribes of Africans that they encountered.