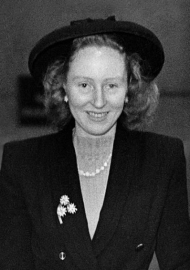 RUTH WILLIAMS was born in Blackheath in South London, the daughter of George and Dorothy Williams. Her father had served as a captain in the British Army in India, and later worked in the tea trade. She was educated at Eltham Hill Grammar School and then served as a WAAF ambulance driver at various airfields in the south of England during the Second World War. After the war, she worked as a clerk for Cuthbert Heath, a firm of underwriters at Lloyd's of London.

In June 1947, at a dance at Nutford House organised by the London Missionary Society, her sister introduced her to Prince Seretse Khama. He was the son of the paramount chief, Sekgoma II, of the Bamangwato people and was studying law at Inner Temple in London after a year at Balliol College, Oxford. The couple were both fans of jazz music.

Their plan to marry caused controversy with elders in Bechuanaland and with the Apartheid government of South Africa. It was considered a racial scandal. The British government intervened to stop the marriage. The Bishop of London, William Wand, said he would permit a church wedding only if the government agreed. To overcome these hurdles, the couple simply got married at Kensington Register Office in September 1948.

Daniel Malan, Apartheid Prime Minister of South Africa, described their marriage as "nauseating.” In contrast, Julius Nyerere, then a student teacher and later President of Tanzania, said it was "one of the great love stories of the world."

The couple returned to Bechuanaland (Botswana), then a British protectorate, where Seretse's uncle Tshekedi Khama was regent. After receiving popular support in Bechuanaland, Seretse was called to London in 1950 for discussions with British officials. He was prevented from returning home and told he had to remain in exile. Ruth joined him in England and the married couple lived as exiles from 1951, living in Croydon. 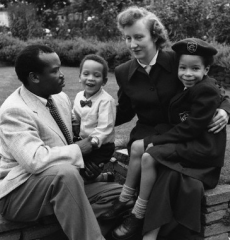 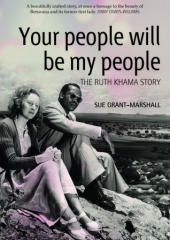 Popular support and protest continued back home and the couple were permitted to return in 1956 after the Bamangwato people sent a telegram to Queen Elizabeth II. Seretse renounced his throne and became a cattle farmer in Serowe. Seretse founded the nationalist Bechuanaland Democratic Party and won the 1965 general election. As prime minister of Bechuanaland, he pushed for independence, which was granted in 1966. Seretse Khama became the first president of independent Botswana and he received a knighthood from the British Queen. The couple were thereafter known as Sir Seretse Khama and Lady Khama. Seretse Khama served four consecutive terms as president from 1966 to 1980. He died in 1980 and Lady Ruth Khama died of throat cancer in Gaborone in 2002 at the age of 78, survived by her four children. She was buried in Botswana next to her husband recognised by all as "Mohumagadi Mma Kgosi."