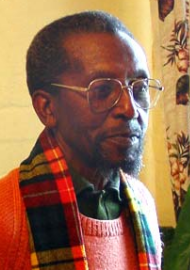 PETER CLARKE  a descendent of the West African Kroo of Simonstown, was born in Cardiff Road in Simon's Town near Cape Town, in 1929. He lived here until 1972 when he was forced to move to Ocean View under the Group Areas Act. His mother was a domestic worker and his father was a handyman in the naval dockyard. As a child his parents noticed his artistic abilities and though did not have much disposable income, they provided him with a regular supply of pencils, crayons and paper. They were avid readers and also encouraged him to read which he did passionately. Peter soon became disenchanted with his schooling and its highly regulated and staid approach. After spending a year at Livingstone High School he told his parents that he no longer wanted to attend school, so at the age of 15, in 1944, he became a cleaner and painter on ships in the dockyard where he worked for the next ten years.

After work and into the late hours, Peter followed his passion which was to paint. In 1947, he began attending evening art classes at Saint Philips School in Cape Town. After he painted a water-colour titled, ‘Towards Simon’s Town from St James,’ his sister, also a domestic worker, brought his work to the attention of someone with influence - Dean Anderson, the head of the architectural school at UCT who bought some of Peter’s works. This was the beginning of his lifelong artist journey.  The next big step was in 1951 when Mathys Bokhorst, the Director of the National Gallery, came to know about him, and Peter had a chance to exhibit his workat an exhibition at the Association of Arts Gallery in Cape Town. While painting, Peter also began writing, and in 1955 he won first prize in a short story competition.

It was in 1956 that Peter found an inspirational retreat in Tesserlaarsdal, a little village in Caledon and from that time spent a few months every year in solitude, painting. He produced many works from then on. With assistance from his lifelong friend, poet James Matthews, Peter held his first solo exhibition in the newsroom of the newspaper, The Golden City Post, in 1957. At that time he said: "Before my exhibition, I was just another coloured man. Our people took it for granted that only whites could do such things. Now they are becoming aware of the fact that we can do these things too; that we are human beings.“ 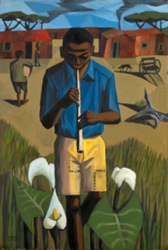 By 1961 Peter had 70 exhibitions in over 20 countries including the United Kingdom, Germany, Norway, Austria, Kenya, Nigeria, and the USA, and in 1962 he studied printmaking in Holland. From there it was on to Norway for further studies and all the time he was also writing. One of his stories - “Eleven O’Clock: The Wagons, the Shore” was broadcast by the BBC. At the peak of his success, Peter Clarke faced forced removal from his beloved Simon’s Town under the dreaded and hated Apartheid Group Areas Act of 1950, to Ocean View township. It hit him hard and brought new dimensions to his art. Like Oscar Wilde’s Picture of Dorian Gray, Peter’s art reflected the harsh realities of social engineering and the deprivations and excesses of the Apartheid police state.

Among the numerous honours that he received are 27 international awards including Honorary Life Membership of the Museum of African American Art, Los Angeles; six South African awards, including the Order of Ikhamanga, silver class and the Molteno Award for services to the visual arts, awarded by the Cape Tercentenary Foundation. Peter Clarke, a truly great artist, writer, and poet died on 13 April 2014 in Ocean View, Cape Town.